Utah Manufacture of the Year

Advanced Composites was honored with the Manufacturer of the Year Award by the Utah Manufacturers Association at their gala dinner on November 7, 2014, along with four other companies. Each of the awarded MotY trophies recognized a particular size tier of company, as measured by number of personnel employed. With about 190 employees, ACI garnered the award for the 51-200 employee category. Utah Manufacturers Association president Todd Bingham editorialized a summary of the ceremony results, and ACI’s press release was carried by several news sites, including NBC.

The award honored Advanced Compsites for steady and sustainable growth; for its quality assurance program; for its burgeoning share in the market for carbon tubes, composite structures, aerospace manufacturing and filament winding; for its contribution to the local economy and for its investment into its employees. 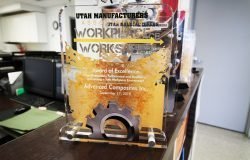